On Sunday morning, Dec. 26, 2004, tourists and citizens in the resort town of Khao Lak, Thailand were starting to awaken to start their day after Christmas. 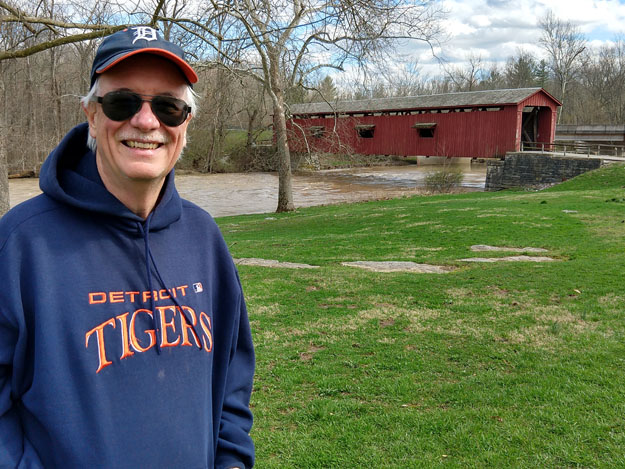 They were unaware that a massive 9.1 earthquake on the Indian Ocean floor, centered 100 miles off the western coast of northern Sumatra, had unleashed a horrific tsunami about to strike their community with a vengeance.

Before the morning had ended, more than 4,500 Khao Lak citizens had perished in the tsunami. Located 80 km north of Phuket in Phang Nga province, Khao Lak had the largest death toll in Thailand. Nearby Phuket lost 250.

Across 13 Southeast Asian countries and in India, more than 227,900 lost their lives that morning in one of the deadliest natural disasters in recorded history.

While some drowned in bedrooms and hotel rooms, others were swept out to sea and their bodies were never recovered. Many who survived lost family members and homes and their means to make a living.

Bangkok-based Ford ASEAN President Mike McCarney was back in Michigan for the holidays when a friend called.

“Have you heard the news?" the friend asked. When Mike turned on the TV and saw the news about the tsunami, his heart sank. He feared for the safety of his team members who often spent holidays on the beaches of this idyllic southern Thailand resort.

Before heading back to Thailand, Mike spent the next 24 hours contacting team members in Thailand to make sure they were safe. He learned that, while some employees were in these coastal resort areas for the holidays, all had managed to escape to higher ground. Thankfully, all Ford team members were safe.

Bill Ford and the Ford leadership team came together quickly in early January to see what the company could do to help in Thailand and in other countries in the region.

Companies always donate money, Bill Ford noted. But Ford Motor Company and its employees are different. To harness that employee spirit and give countries and NGO's a place to go for volunteer assistance, Bill created the Ford Volunteer Corps. The Corps provides a framework to help the company sort through the endless sea of programs and projects that can use the support of Ford volunteers.

Then Chief of Staff Jim Vella asked me to head up the new organization. The first job was to work with the Ford of Thailand team to develop and implement a plan and, as soon as Ford Land volunteer Jeff White and I could get a flight, we were off to Thailand and India, countries where Ford had a large presence.

When Jeff and I arrived in Khao Lak, we saw the skeletal remnants of four-story hotels, overturned cars and trucks, blankets and mattresses twisted around palm trees, and a Thai Navy ship more than a mile inland on its side. We also discovered that Mike McCarney and Ford of Thailand leaders had quickly developed a brilliant game plan.

Over the next year, Ford would partner with Habitat for Humanity to build homes in Khao Lak. On Sundays, a team of 20 or more volunteers would board a bus near the Ford of Thailand headquarters for the 12-hour trip. The volunteers came from many parts of the company, including Auto Alliance Thailand (a Ford-Mazda assembly plant in Rayong), Ford Marketing and Sales, Ford Credit and dealerships.

In Khao Lak they spent the week making roof tiles, blocks, and door and window frames and digging foot holes, before, eventually, constructing the homes themselves under the direction of Habitat. 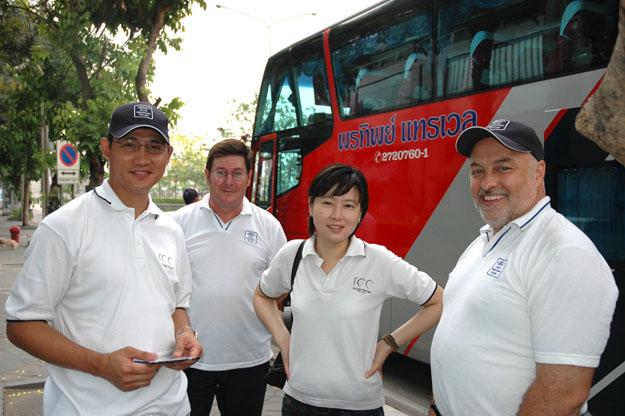 The volunteers stayed at a lodge set on higher ground that had escaped damage.

After a week of work, the volunteer crews returned to Bangkok by bus on Saturday. Then, on Sunday, another team of volunteers boarded for the trip to Khao Lak.

By the end of the year, more than 500 Ford volunteers had made the trip to Khao Lak, teaming up with survivors to build 224 homes. The volunteers made new friends as they worked side-by-side with villagers who often shared their stories of survival.

A writer for The Bangkok Post pointed out that Ford's altruism was rewarded. “Companies spend thousands of dollars on team building exercises that will never match the bonding felt by Ford employees during their stay. When making tiles or having a drink at the end of a hard day, there are no ‘stripes,' hierarchy, race, sex or age in the volunteer corps. Everyone is there for one reason—to help rebuild Khao Lak.

“The volunteers know their contributions are priceless and cannot be qualified in baht or dollars," the newspaper added. “Their time is a real labor of compassion. They made a difference."

The experience had a lasting impact on Ford volunteers.

“Every day of my stay, I thank our company for offering such a marvelous experience for me to help people of my country who really need it," Ford of Thailand volunteer Pattarin Wimolpitayarat told the Bangkok Post. “We gave our enthusiasm, willingness to work as a team and strong desire to make a difference. Pride and pleasure are what we got in return."

Later in 2005, Ford volunteers helped in the aftermath of Hurricane Katrina in the U.S. Gulf Coast region. Ford dispatched a mobile communications center and security employees, to coordinate activities for emergency crews from various agencies. Working with Habitat, Ford volunteers also helped build frames used in 51 homes for survivors of the hurricane.

In southeast Michigan, hundreds of volunteers turn out annually to restore and preserve the fragile Rouge River ecosystem. They build and repair bridges and sidewalks, remove invasive weeds, plant trees and clean the watershed area. Parks and Recreation officials say Ford volunteers accomplish in one day what would otherwise take up to three years to do.

In 2006 the Ford Volunteer Corps announced a Global Week of Caring, encouraging Ford employees across the globe to step up and take on a service project in their communities.

“Pictures and stories of Ford team members cleaning beaches in South America and painting schools in Mexico and other activities came in from across the globe," says former Ford Volunteer Corps Manager Nancy Branstetter. “And it's still being done. How cool!"

On Wednesday morning, April 26, 2006, more than a hundred Ford and UAW employees and retirees and many of our 130 Detroit-area nonprofit agency partners gathered in the WHQ Auditorium to celebrate the first anniversary of the Ford Volunteer Corps during National Volunteer Week.

In attendance were our first "Volunteers of the Month," including Harold Tiburzi who headed a team of volunteers to deliver food baskets to low-income seniors through Focus:HOPE; Mike McCarney, who led the effort to put together the post-tsunami partnership with Habitat for Humanity International in Thailand; Gloria Jefferson, Ford Credit-Houston, for being a foster mother to infants born to crack-addicted babies; and a half dozen others.

Among our partners joining us that morning were Habitat for Humanity, Salvation Army, Cass Community Social Services, the JDRF Walk to Cure Juvenile Diabetes, the Susan G. Komen Breast Cancer Foundation, and the Detroit Public Schools.

Together we saluted outstanding volunteers, recognized and thanked our nonprofit partners, and discussed areas where we were focusing our efforts in the future: Basic human services, disaster relief and education.

As I looked around the Auditorium, I thought about the thousands of employees, retirees and family member volunteers throughout world—who do so much to make our world a better place.

Clearly, I thought at the time, we have some of the most giving people on the planet. How blessed I am to have been a Ford Motor Company employee for the past 24 years and to have been selected to lead the Volunteer Corps in its first year.

Two days later, I turned over the reins to a new Volunteer Corps leadership team, and I retired from the company to teach public relations as a professor of practice at Indiana University.

In my PR classes I incorporated service learning, enabling students the opportunity to work with Habitat for Humanity, Boys and Girls Clubs, Big Brothers Big Sisters and other nonprofit partners. 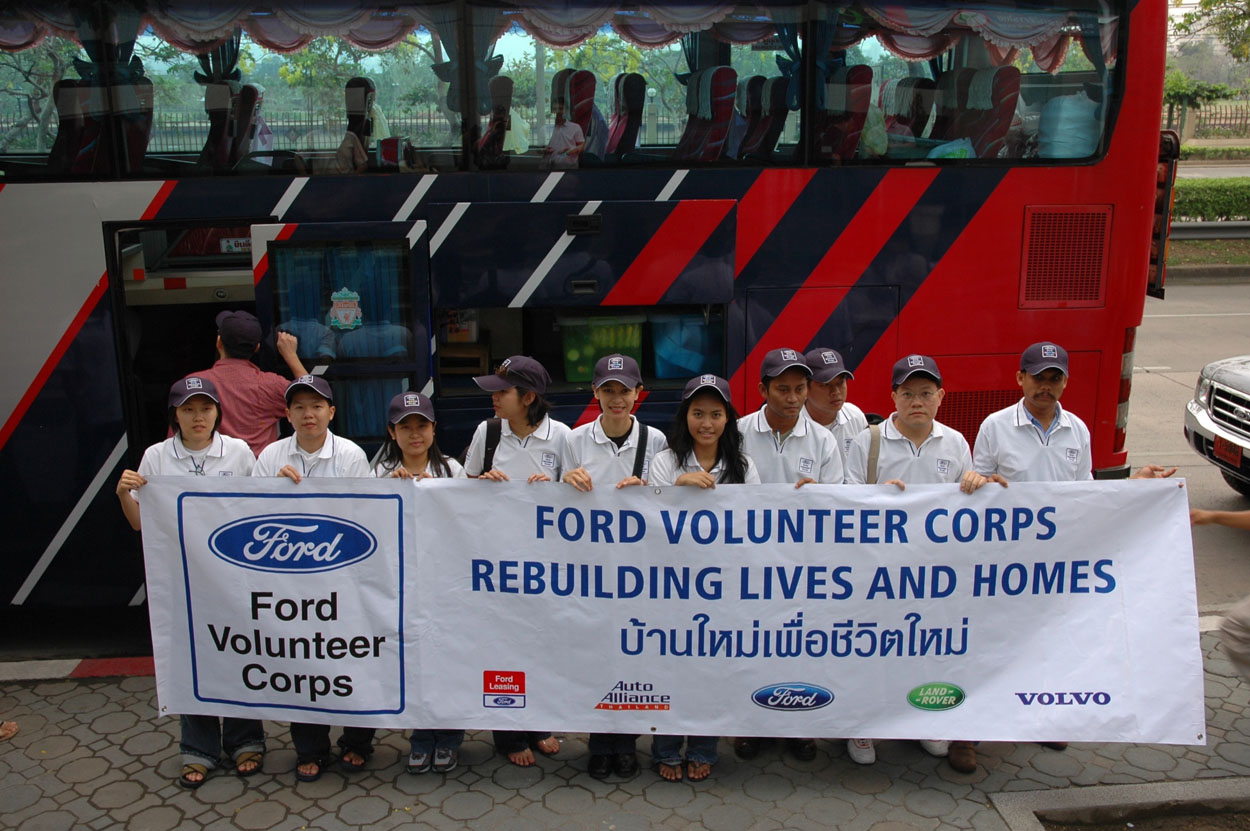 Through the Years: Ford Volunteer Corps