Ford Focus on Child Hunger Campaign Helps Those in Need

Ford Fund and local Ford dealers in Alaska, northern Idaho, Montana, Oregon and Washington are donating $100,000 to the Boys and Girls Clubs to help feed children during the holidays, when school nutrition programs are unavailable. The grants to 65 clubs across the region are part of the annual Ford Focus on Child Hunger campaign.

"Ford's ongoing commitment to hunger-alleviating programs in Boys & Girls Clubs across the Northwest region is making the holidays that much brighter for thousands of kids and their families," said Katya Miltimore, executive director, Boys & Girls Clubs of Washington State. "We appreciate being able to engage local dealers and work side by side with them to address this most pressing human need."

Ford Focus on Child Hunger also includes the annual Ford Peanut Butter Drive each spring. Northwest Ford dealers this year collected 193,000 pounds of peanut butter, bringing the total since 2014 to 500,000 pounds of peanut butter. That's enough for more than 10 million meals for hungry boys and girls during the summer break from school. Last year, the Ford Peanut Butter Drive spread from the west coast to the east with Massachusetts, New Hampshire, Rhode Island and Vermont joining the effort. Ford Fund, New England Ford Dealers and area food banks hauled in 10,452 pounds of peanut butter for hungry children and families, doubling the amount collected during the inaugural summer-time drive in 2018.

"The success of this Ford Focus on Child Hunger Peanut Butter Drive is a tremendous example of the impact businesses and the public can have on fighting hunger in New Hampshire," said Eileen Liponis, executive director, New Hampshire Food Bank, a program of Catholic Charities New Hampshire. "We cannot thank the Ford Fund enough for this incredible support." 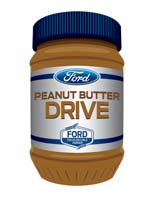 The U.S. government reports that more than 37 million people live in food-insecure households, and Ford Fund's work to feed the hungry does not end with peanut butter on east coast, west coast or anywhere in between. During the holiday season more than 1,200 Ford volunteers will also be participating in over 130 community service projects from Michigan and Illinois to Florida, North Carolina and Massachusetts. Most of the activities will be food related to help make people's live better. Ford volunteers prepare and serve meals, and pack and deliver food year round to build stronger communities.

"Meeting basic human needs is a critical part of our mission in the U.S. and around the world," said Todd Nissen, director, Ford Volunteer Corps. "Without the stress of hunger, children are healthier and able to do better in school, and adults have the energy and focus to take advantage of opportunities that can improve their lives."

Over the past 70 years, Ford Fund has invested more than $2 billion to support education, promote safe driving, enrich community life and encourage employee volunteering in more than 60 countries around the world.