The snapping of firecrackers could be heard throughout Kumizhi, a rural village of 330 families just outside of Chennai, India. The streets were festooned for a celebration. Villagers dressed in their finest clothing, happy smiles on their faces, shared words of appreciation for a remarkable gift.

Inside their modest homes, the villagers posed proudly in front of newly installed SMART toilets, each decorated with balloons as local dignitaries announced that Kumizhi is at last free of open defecation.

In late March, Ford employees and volunteers completed the installation of 300 toilets in village homes and public facilities. The toilet installations in Kumzhli are the first of a three-part program funded by a $140,000 Bill Ford Better World Challenge grant to improve sanitation conditions in India. Jointly supported by the Ford Motor Company Fund and Bill Ford, executive chairman of Ford Motor Company, BFBWC encourages employees and community partners to submit ideas that solve global problems, including issues surrounding mobility and scarcity of food, water and shelter.

“The first of the toilets was constructed at the house of a person who could not walk,” said Sri Srikanth, a Ford employee based at the Chennai plant who is reporting on the project via his blog. “He spoke about how he was now a freed man. Prior to the toilet at his home, he had to rely on others who had to carry him or bike him across the road in to the forests where he could then relieve himself. If no one was available, he just had to hold.

“He said, ‘I do visit temples, and the only prayer that I had to God was to have someone build a toilet for me. This toilet is a dream come true.’” 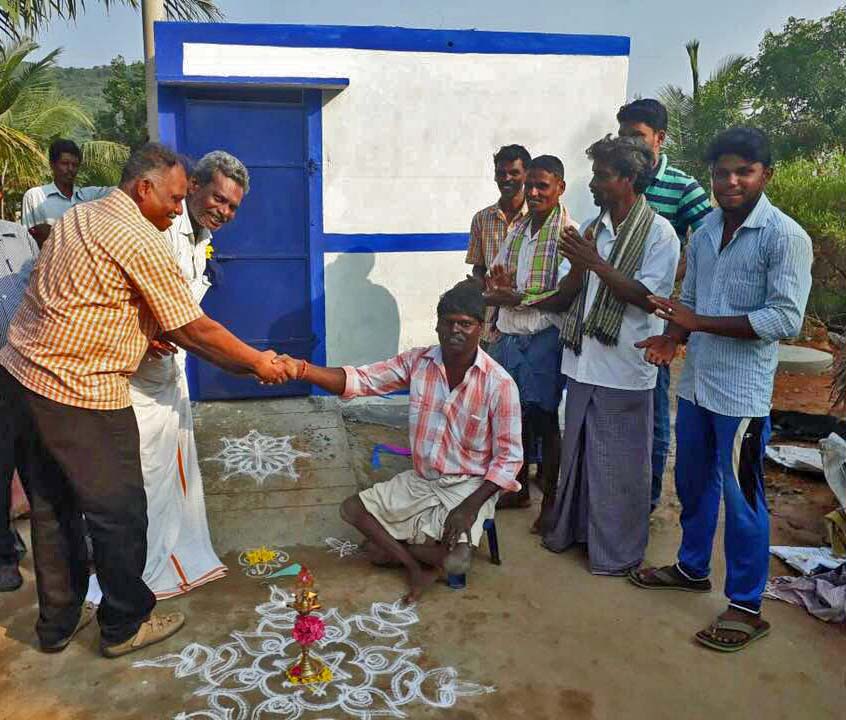 Because Mr. Sundaram cannot walk he relied on others to take him outside to relieve himself. The first toilet was built for him. Photo courtesy SME
By mid-June, villagers in nearby Kalvoy will have use of another 400 toilets. For the third and final phase, 300 toilets will be installed in Kannivakkam village by August.

“This is much more than a toilet to the people in these villages,” said Jennifer Leonard, a brake engineer for Ford spearheading the Chennai project. “It is a sense of freedom, a sense of safety and a feeling of ownership that lets them know they are not forgotten and they are valued, despite the life they were born into. They can now see the improvement it will have on their health and lives.”

Leonard witnessed open defecation, poor sanitary conditions and lack of basic hygiene when she traveled to Ghana in 2016. The unforgettable experience forever changed her perspective.

Last year, she submitted a proposal to improve sanitation near Ford’s Chennai plant and won the BFBWC grant.

Now she works tirelessly to coordinate the international program. Her meetings take place in the middle-of-the-night to work out details including permits, construction, mobilizing volunteers, cost and the need to educate villagers about how toilets and basic hygiene improve health.

The Ford Fund team is currently reviewing applications for the 2018 BFBWC grant funds and winners will be announced later this year.

Meanwhile, volunteers continue working to build a community center in Guayacan, Mexico, using BFBWC funds. The center, near Ford’s Hermosillo plant, will soon provide 750 families with uncontaminated water, access to flushing toilets and a free meal on Sundays provided by a local church.

Ford also is working with Aqua Clara International, a Michigan-based nonprofit, so the families can install an in-home, water filtration system for $5.

Last year, BFBWC awarded a $250,000 grant to a group of Ford Thirty Under 30 members to launch the Ford Mobile Food Farm, an indoor farming and educational program for Detroit to provide area residents and restaurants with fresh produce year-round. A hydroponic container garden will be housed at Cass Community Social Services in Detroit and produce 52 harvests annually. An F-150 pickup truck with a garden planted in its bed will visit local schools, offering hands-on lessons about farming to 2,250 Detroit-area students.

In 2016, BFBWC also provided $200,000 for the Thailand Clean Water Community Project to upgrade access to clean water with purification systems, wash basins and restrooms in nine rural schools. Ford volunteers also planted hundreds of banana trees, part of the fruits and vegetables they raised to be served in school lunches and sold to generate income to expand school programs.

Another $250,000 was awarded to fund the GoodTurn app project, which was introduced last summer in the Apple store. The app, managed out of the metro Detroit region, connects volunteers from Ford to community nonprofits in need of transportation help. The app continues to receive updates.