The Detroit Free Press in August published a three-part story on the state of Puerto Rico after the devastating effects of Hurricane Maria there in 2017. We applaud reporter Phoebe Wall Howard for taking an interest in a story that has been severely under-reported.

I understand too well how TV and other news media work. Long before I joined Ford, I was a television news director and producer. Assembling a 25-minute newscast that holds viewers’ attention wasn’t easy — and that was before the internet.

The plight of Puerto Rico is a story that must stay top of mind because what happened to the residents of the island could have happened to any of us.

Puerto Ricans are citizens of the United States of America. Yet many of their fellow citizens on the U.S. mainland are unaware of that important truth. If Hurricane Maria had devastated Florida as it did Puerto Rico, we would have seen a very different response. 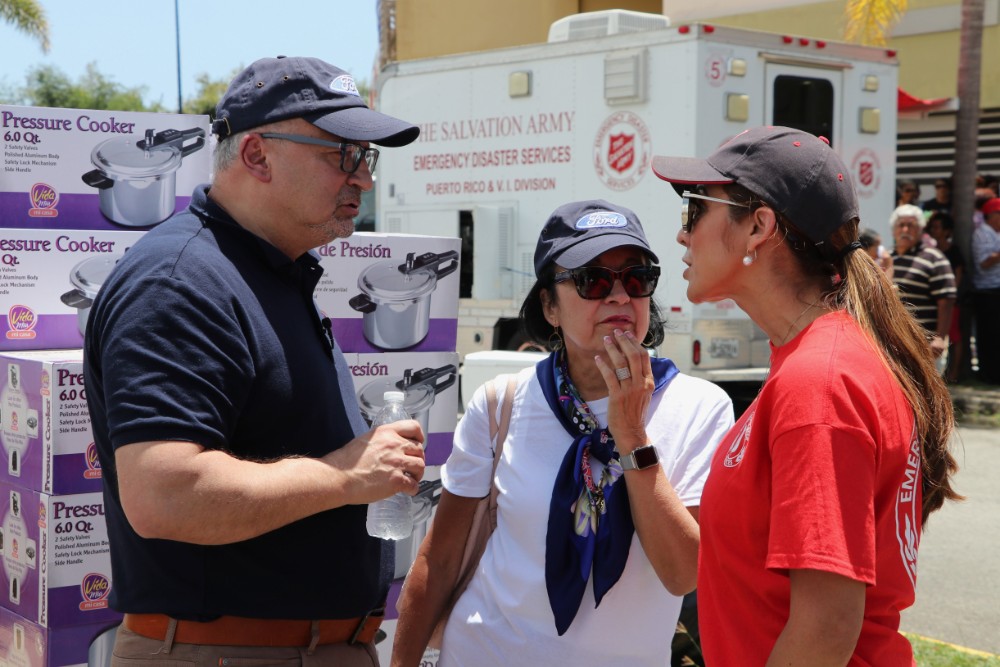 I traveled to Puerto Rico in April, eight months after Hurricane Maria. In some ways, the island functions as normal. People go to work. Shops and stores are open for business. Kids attend school.

But the island remains in a fragile state.

Our Ford teams are still busy assisting community members, many of whom are still struggling.

In Bayamón, about 10.5 miles outside of San Juan, we handed out food, water, disaster preparedness literature, and water filters and provided medical services. In Maunabo, a heavily impacted municipality on the south side of the island still struggling with a lack of water and electrical services, we spent several hours distributing food, water, gas stoves and toiletry kits to families in need. As we drove through the hilly countryside, we passed electrical workers still making repairs by the side of the road.

Something else stood out: There were blue roofs on many of the houses. Except, as I learned, the blue parts are not actual roofs but FEMA tarps given to homeowners with damaged roofs. The tarps looked like a field of flowers, sprouting forth and scattered among the broken trees.

Our day connecting with Puerto Ricans was meaningful and humbling. Their charismatic and amicable attitude is something tourists remember most after a trip to the island. Each family I met received me with a welcoming smile. Even while holding back tears and recounting the terrifying events they experienced during Maria’s fury, they are positive better things are on the horizon.

Although the experience was rewarding, I could not shake the thought that there is so much need in Puerto Rico.

During my visit to Puerto Rico, an excavator working near a fallen transmission tower got too close to a high-voltage line. Suddenly, more than three million people were in the dark. Again. Then we experienced what Puerto Ricans live with every day — uncertainty.

This has become part of the fuel that drives them to move forward.

The outage also provided a glimpse into Puerto Rico’s complex connection to the United States. While neighborhoods and families made do without electricity, buses arrived at San Juan hotels to transfer the Minnesota Twins and Cleveland Indians baseball teams to Estadio Hiram Bithorn. The evening game, broadcast on ESPN, was played under lights powered by portable generators. This is also part of the story of Puerto Rico: Living in two worlds.

In Puerto Rico, everyone is family. I lost count of how many stories and anecdotes I heard about selfless acts of kindness from neighbors toward neighbors. People who lost their homes didn’t dwell on their personal plight, instead they got together with others in need and coordinated community efforts to help each other. I could see they are aware of how much time it will take for their lives to go back to normal. Long-term support is crucial to reach that stability.

Like so many, I have never been in a hurricane. I can only imagine what it was like for the people of Puerto Rico. In fact, mental health issues have surfaced as a primary concern going forward. Calls to suicide help-lines are up.

As the one-year anniversary approaches, on Sept. 20, coping with the stress is a very real issue for children and adults alike. This is why we have directed so many of our own resources toward agencies that provide counseling and other mental health services.

In the end, what keeps Puerto Ricans going each day is their strong faith, their sense of family and community, and that this is their home.

Nevertheless, they feel abandoned and left to fend for themselves. With another hurricane season upon them, you see fear in their eyes it could happen again, but you also see determination to face whatever comes. Along with our dealers, we will continue to stand with Puerto Rico for the coming months. Working together is how communities build a better future.

How you can help

Organizations across the country are working toward recovery in Puerto Rico, but they need help. Here are a few:

How a Ford dealership in Puerto Rico became a rescue site

After Maria: Winds are gone, storm lives on for people of Puerto Rico

These sunflowers in Dearborn have personal meaning for Bill Ford