Driving in a global world

Driving behaviors vary widely around the world. Some make left turns from far lanes and drive aggressively. While other drivers fill a vehicle with more people than there are seats and navigating through rough terrain and around wildlife.

Whatever the behavior or environment, there are about 1.25 million fatalities from traffic crashes around the world each year, reports the World Health Organization (WHO), which adds that many of these tragic incidences are preventable

“Some people are extremely skilled in their driving, but they make extremely poor decisions in the way that they drive,” said Kyle Green, International program manager for Ford Driving Skills for Life (DSFL). “They weave in and out and make unnecessary maneuvers. They are not following laws, not watching out for hazards in the road.

In 2008, a visionary in Ford’s Asia-Pacific office realized the program could help save lives in the Philippines, Vietnam and Thailand as well. The program spread to Taiwan and China in 2009 and then to India and South Africa in 2010. In 2012, Ford Fund partnered with global markets to help fund expansion into European countries.

Now celebrating its 15th anniversary, Ford DSFL has trained more than 1 million drivers and is operating in 41 countries. Ford DSFL plans to add programs in Madagascar and Morocco before the end of 2018.

Many of the markets in which DSFL operates provide safe-driving training programs not only for teen drivers but also for newly licensed drivers of all ages. As countries develop economically and improve infrastructure, more people are able to afford vehicles. Accordingly, there might be first-time drivers who are in their 50s.

“There are countries where the car dealer will deliver the vehicle to someone who has never driven in a place where there’s no way to get training. In countries, such as Mexico, there are drivers who purchased licenses or simply drive unlicensed because they don’t have access to or won’t participate in driver education,” Green said.

Adapting to needs, country by country

At first, Ford DSFL provided other regions with a few web-based materials, such as 10 tips on safe driving. Those tips eventually evolved into specific information related to what drivers might encounter in each country.

Now, the global program is hands-on and customizable. One of the beauties of Ford DSFL is its ability to tailor programs to cultural differences, laws and infrastructure.

“We don’t give them DSFL in a box,” Green said. “We give them some of the basic principles of the program that are important to traffic safety. They can then customize the program to address the key issues in their respective countries or cities.”

Drivers in some countries put as much as they can on top of a vehicle or as many people on, in and around the vehicle as they manage, he said.

“We would tell them, ‘Don’t have too many passengers, and don’t overload the top of the vehicle,’” Green said. 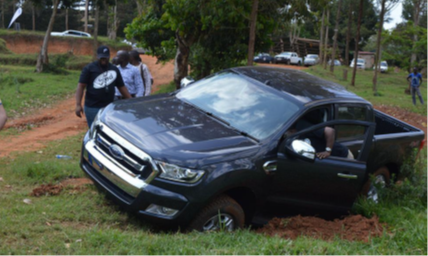 In Sub-Saharan Africa, off-road driving and hijackings are prevalent. According to Tracker South Africa, there are about 45 cars hijacked there daily. More than 16,000 hijackings occurred in the region from April 2017 to March 2018 alone.

Accordingly, Ford DSFL customized a hands-on program to teach hijacking prevention in the region. And because roads often are unpaved and landscape rugged, Green said, drivers also need to understand how to drive safely off-road.

“Many people are not properly educated about the limits of a vehicle and what they should or should not attempt,” Green explained.

Ford DSFL launched in the Middle East in 2013. In March 2018, after Saudi Arabia lifted a royal decree banning women from obtaining a driver’s license, Ford DSFL launched Ford Driving Dreams DSFL for Her program in partnership with Effat University. The program trained more than 250 female students on the vehicle itself, on distraction, impairment and braking.

Across Europe, awareness of other road users has become increasingly important, with a rise in cycling and other mobility solutions in various countries and cities. 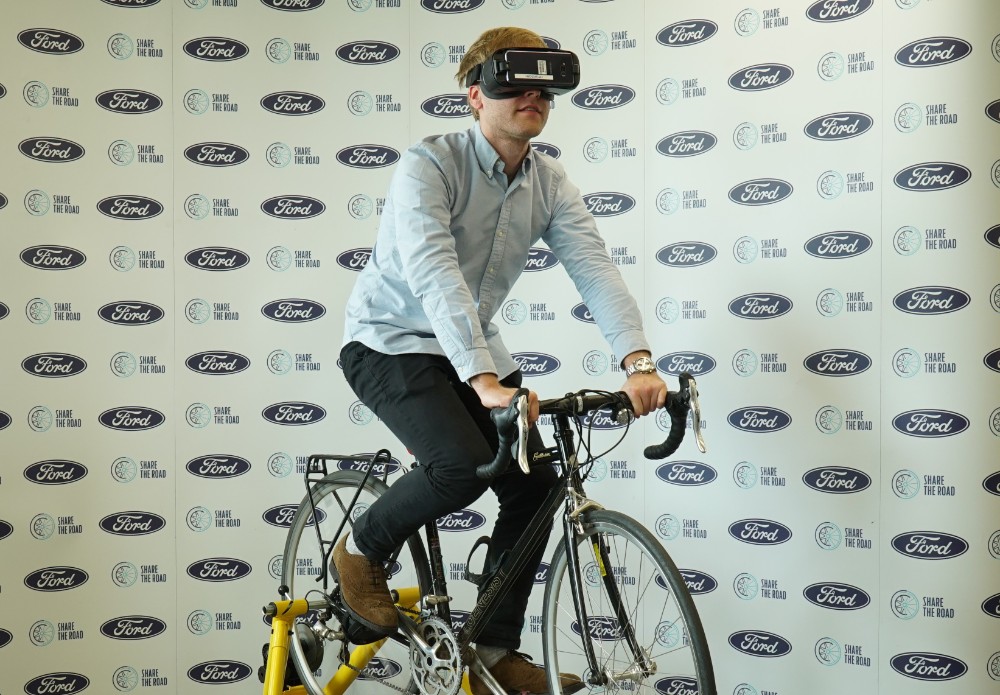 Subsequently, Ford DSFL Europe introduced WheelSwap, a virtual reality application that allows participants to see the road from the perspective of cyclists and drivers. The aim is to encourage greater empathy between the different people sharing the road. About 90 percent of the U.K. WheelSwap participants said the experience changed their behavior within 2 weeks. The DSFL program has since been introduced across Europe and adapted in several Asia Pacific and North American countries. 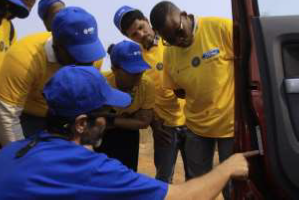 Vehicle maintenance is a key component of any Ford DSFL course. Instructors teach participants proper tire inflation and where to find information about the vehicle inside the door panel.

Racecar driver Martin Semerád was among the instructors at the event. He said, “Many of us take many advanced lessons in various fields, but rarely in driving. But it’s one of the most dangerous activity we practice almost every day.”

Debbie Chennells, Ford Fund manager of Ford of Europe, says after the first three years of working with more than 1,900 participants at Ford DSFL in Belgium, instructors concluded more than 90 percent of participants had never performed an emergency brake and needed two or three attempts during DSFL to use the brake pedal the way they should. Now that training is a key component in the program, and Ford Belgium is advocating for emergency braking to be part of standard driver training.

In Russia this year, Ford DSFL trained nearly 300 ambulance drivers in Ford Transit-converted ambulances in advance of the annual international soccer competition that drew more than 1 million visitors to the country.

“Drivers of emergency vehicles need to be especially cognizant of how to cross an intersection or blind corner, since they aren’t always in the position to stop at lights or signs. They are trained in emergency breaking and maneuvering. Somebody is going to cut in front of them. People panic and don’t know what to do in an emergency. We taught them how to drive a larger vehicle, maneuver through tight spaces, appropriate speed and other limits,” Green said.

One thing he noticed on a trip to Hanoi, Vietnam, was the number of mopeds on the road. Despite the throng, Vietnam authorities have had a difficult time enforcing the helmet law. Though people started wearing them, many found literal loopholes.

“Some have a hole cut out of the back, so women can wear them with ponytails. Even when you do something good, there are challenges,” Green said.

Still, he said seeing countries take Ford DSFL and make the program their own has been remarkable. Vietnam has created a “No Honking” campaign because after a while people tune out the sound that’s supposed to put them on alert. And Russia used the program to train bus drivers, while the team in the Philippines trained Uber drivers.

Essentially, Green said, “The core of the program, just like in the U.S., boils down to teaching drivers how to be smart decision makers on the road. Drivers need practice, and they need to have empathy concerning what other drivers and pedestrians see.” 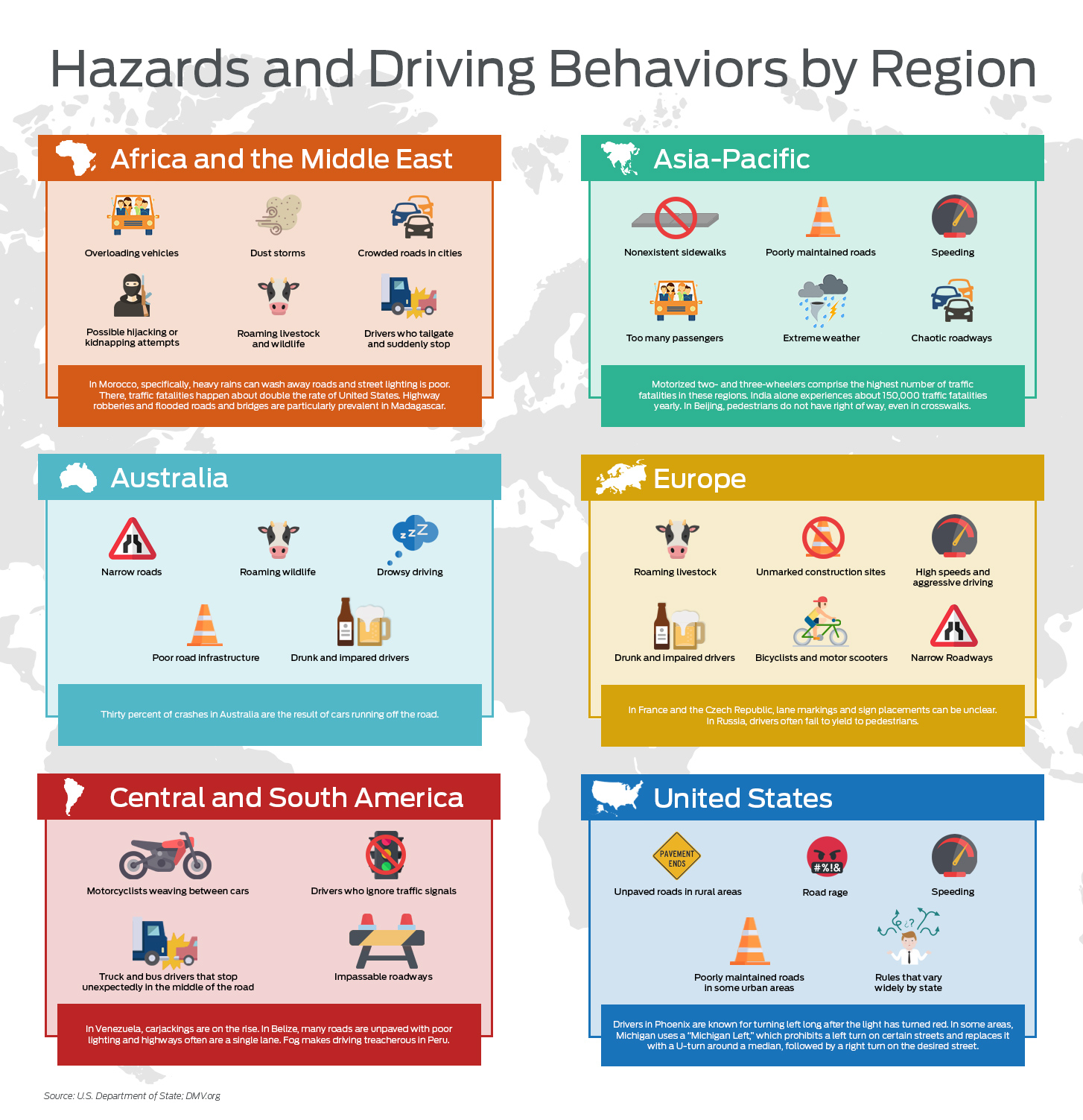