DEARBORN, Mich., Dec. 4, 2019 — Ford Motor Company Fund, the philanthropic arm of Ford Motor Company, announced Precision Blendz as the grand prize winner of $10,000 in the Men of Courage Cincinnati Barbershop Challenge. Precision Blendz was selected for having the greatest community participation and the most creative partnerships over the three month competition period. Their activities included conversations on suicide prevention, and public safety with Cincinnati Police officers. Additionally, they also provided health screenings, and sessions on building credit and financial literacy—all culminating with a celebratory event highlighting the mission and vision of the Men of Courage program.

Runner-up Razor 1 Kutz, will receive the secondary prize of $5,000 to be donated to a non-profit organization of their choice. The two finalists were previously selected to compete based on their implementation of initiatives and activities that educate and reinforce positive narratives around African American men.

"We commend Precision Blendz for emerging as the first-place winner in a very competitive program," remarked Pamela Alexander, director of Community Development, Ford Motor Company Fund. "Each of the barbershops in the challenge developed innovative community events and partnerships that will make a positive impact on the Cincinnati community for years to come."

Tommy Mays and Michael Thomas, Jr., owners of Precision Blendz, say they incorporated a lot of feedback from their clients and community into their proposal and worked hard to reflect that input in their events. "To be honest, we weren't sure we had done enough to win but the opportunity to uplift our community and expand our presence was a reward in itself", said co-owner Mays. The $10,000 will be used to fund renovations and improve the condition of their client experience at the barbershop.

Razor 1 Kutz, owned by Donald Hudson, is also grateful for the opportunity. "We may have fallen short of the ultimate goal, but we couldn't be prouder of our effort and the community support," Hudson said with a smile. "We look forward to working with the Omega Mentoring Youth program and elevating the Men of Courage principles throughout South Cincinnati." The three-year mentorship program provides early intervention and prevention services for at risk youth in grades 4 through 12 who are susceptible to educational failure, teen pregnancy, truancy and juvenile delinquency.

The Men of Courage Barbershop Challenge now heads to the pacific northwest to announce the two finalists from the Tacoma, Washington challenge. Owners were once again invited to apply by providing proposals that mirror the Men of Courage mission for a chance to win financial support to implement those ideas.

The two finalists selected for Tacoma are Goodfellas253 and Legends Barbershop Over the next few months the finalists will implement ideas to host a minimum of six community events to take place from Dec. 21, 2019 to March 15, 2020 and will be judged by a panel consisting of representatives from Ford Fund, the City of Tacoma, Washington State History Museum, as well as local college student ambassadors. Finalists will be evaluated and will be judged for their innovation and community impact.

The Men of Courage Barbershop Challenge is an extension of Ford's Men of Courage program—an initiative aimed at furthering the narrative of positive imagery and messaging around African American men. The challenge centers around the keystone of those communities, the African American barbershop, and encourages shop owners to utilize their foundation to turn conversation into outreach.

The Men of Courage program serves as a complimentary grassroots activation to the Men of Change: Power. Triumph. Truth. exhibition and will now move to the Washington State History Museum in Tacoma, Washington Dec. 21, 2019 through March 15, 2020.

Created by the Smithsonian Institution Traveling Exhibition Service (SITES), Men of Change is made possible through the support of Ford Motor Company Fund and highlights revolutionary men—including Muhammad Ali, James Baldwin, Ta-Nehisi Coates, W.E.B. Du Bois and Kendrick Lamar— whose journeys have altered the history and culture of the country. Cincinnati's Freedom Center is the first stop of the national three-year tour. For more information visit sites.si.edu.

For more information on Ford Fund programs that support the African American community, go to http://fgb.life. 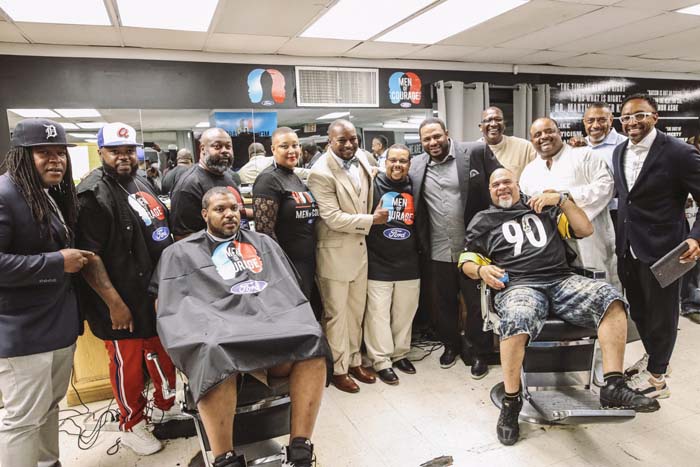 As the philanthropic arm of Ford Motor Company, Ford Fund's mission is to strengthen communities and help make people's lives better. Working with dealers and nonprofit partners in more than 60 countries, Ford Fund provides access to opportunities and resources that help people reach their full potential. Since 1949, Ford Fund has invested more than $2 billion in programs that support education, promote safe driving, enrich community life and encourage employee volunteering. For more information, visit www.fordfund.org or join us at @FordFund on Facebook and Twitter.

Ford Motor Company's Men of Courage (MOC) initiative launched in 2015 as a grassroots program designed to build communities by advancing the narrative of black men through storytelling, intergenerational forums, and community programs. Since its inception, MOC has hosted forums in the five cities and reported more than 2,000 toolkit downloads across 34 cities throughout the US.