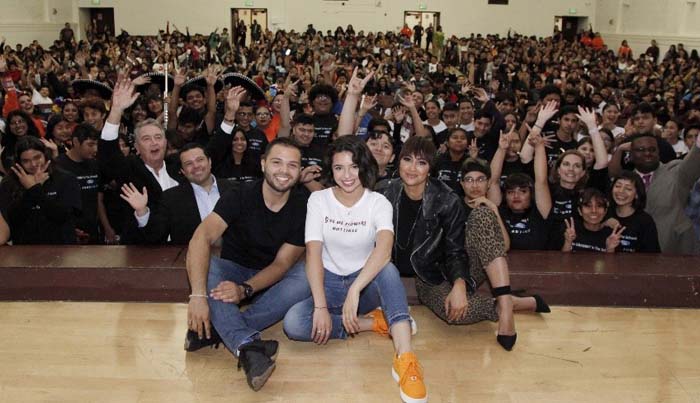 LOS ANGELES, Sept. 11, 2019 — The Latin GRAMMY Cultural Foundation®, in partnership with the Ford Motor Company Fund, today donated musical instruments valued at $20,000 USD to Huntington Park High School in Los Angeles, and hosted an educational panel for the school's students. Singer, Latin GRAMMY® and GRAMMY® nominee Ángela Aguilar shared her experiences as a young musician juggling academics, recording music and her commitments as an artist. She encouraged students to stay focused on their passions and developing their craft. Hearing first hand from an artist who at their age has reached great success had a strong impact on the students. Actress, singer and entrepreneur singer Jackie Cruz moderated the panel.

Since the beginning of the partnership with the Ford Fund in 2014, more than 6,000 students have benefited from the donation of more than $400,000 USD worth of musical instruments to schools in U.S. cities such as Aransas Pass, Texas; Dallas; Las Vegas; Los Angeles; Miami and New York, as well as internationally in Buenos Aires, Argentina; Mexico City; and Arecibo, Bayamón, Humacao and San Juan, Puerto Rico. 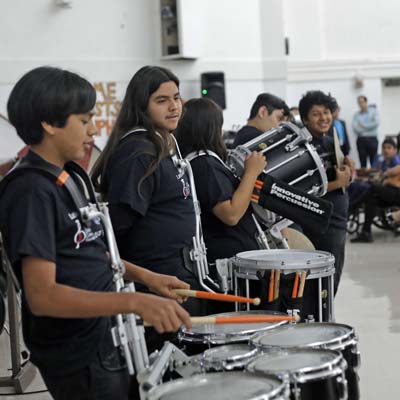 The percussion line of Huntington Park [California] High School at the recent Latin GRAMMY In The Schools event.

Latin GRAMMY® In The Schools is an educational program that informs and connects music students with professionals in the Latin music industry and supports music departments of educational institutions that have financial limitations. The Foundation invites artists, professional musicians and sound engineers to visit middle and high schools, universities, or music education institutions in order to share with students their personal stories and experiences that highlight the effort and perseverance it takes to overcome obstacles and barriers in their careers. The goal is for students to learn to optimize the educational opportunities presented to them, giving them an advantage and strong academic preparation in order to be able to compete in the music industry. The Foundation has hosted events in schools and musical institutions in Argentina, Chile, Colombia, Mexico, Peru, Puerto Rico, Spain and the Unites States. Previous artists who have participated in the program include David Bisbal, Miguel Bosé, Calle 13, Pedro Capó, Chino & Nacho, Luis Coronel, Silvestre Dangond, Joss Favela, Fonseca, Luis Fonsi, Gente de Zona, Leslie Grace, Carlos Jean, Jesse & Joy, Natalia Lafourcade, Ednita Nazario, Christian Nodal, Ángel "Cucco" Peña, Prince Royce, Olga Tañón, Diego Torres and Carlos Vives.

When it comes to Ángela Aguilar's debut, it is hard to decide what is more impressive: her nominations at the 19th Annual Latin GRAMMY Awards® for Best New Artist and Best Ranchero/Mariachi Album for Primero Soy Mexicana or that she earned them at just 14 years of age. At the 61st Annual GRAMMY Awards®, she was a nominee for Best Regional Mexican Music Album. The youngest of the Aguilar dynasty (father Pepe Aguilar, and grandparents Antonio Aguilar and Flor Silvestre), Ángela adds to the family lore with her wise-beyond-her-years vocals on "La Llorona." She also holds her own on "Tu Sangre En Mi Cuerpo," a song of love between father and daughter. "Given that God has given me the pride of having you/I want to tell you, my daughter/That I'll always be with you,” sings Pepe, and she responds, "Besides adoring you/I admire you and respect you." The family story continues: At a young age, Ángela Aguilar is earning the admiration and respect of her audience.

About The Latin GRAMMY Cultural Foundation

The Latin GRAMMY Cultural Foundation® was established by The Latin Recording Academy® to promote international awareness and appreciation of the significant contributions of Latin music and its makers to the world's culture, and to protect its rich musical legacy and heritage. The Foundation's primary charitable focus is to provide scholarships to students interested in Latin music, as well as grants to scholars and organizations worldwide for research and preservation of diverse Latin music genres. Take action in supporting our mission by donating today via our Facebook page. For additional information, please visit us at www.latingrammyculturalfoundation.com. For the latest news and exclusive content, follow us at @latingrammyfdn on Twitter and Instagram, and Latin GRAMMY Cultural Foundation on Facebook.

As the philanthropic arm of Ford Motor Company, Ford Fund's mission is to strengthen communities and help make people's lives better. Working with dealers and nonprofit partners in more than 63 countries, Ford Fund provides access to opportunities and resources that help people reach their full potential. Since 1949, Ford Fund has invested more than $2 billion in programs that support education, promote safe driving, enrich community life and encourage employee volunteering. For more information, visit www.fordfund.org or join us at @FordFund on Facebook and Instagram and @fordfund_ on Twitter.