CINCINNATI, Ohio — The National Underground Railroad Freedom Center along with Ford Motor Company Fund announced programming in conjunction with the opening of "Men of Change: Power. Triumph. Truth." exhibition from the Smithsonian, and Ford's Men of Courage Cincinnati Barbershop Challenge. Programming begins Friday, August 16 and includes the Cincinnati Leadership Forum, the Men of Courage Barbershop Challenge and the Men of Change Curator Talk. 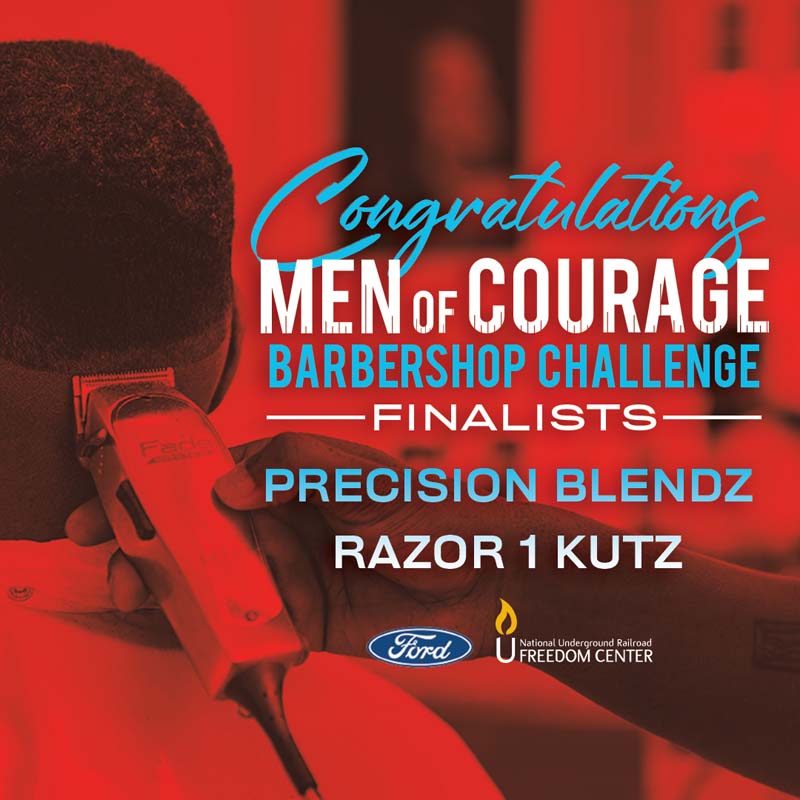 The Men of Courage Barbershop Challenge also kicked-off at Razor 1 Kutz and Precision Blendz. The shops are finalists in the Barbershop Challenge contest where in which the shops are competing over the next three months to win a $10,000 grant based on the shop's implementation of initiatives and activities that educate and reinforce positive narratives around African American men. The Men of Courage Barbershop Challenge is an extension of Ford's Men of Courage program — an initiative aimed at furthering the narrative of positive imagery and messaging around African American men. The challenge centers on a keystone in communities, the African American barbershop, and encourages shop owners to utilize their existing foundation for community conversation as a launch pad to turn those ideas into community outreach.

"Men of Change" was created by the Smithsonian Institution Traveling Exhibition Service (SITES), and is made possible through the support of Ford Motor Company Fund. The exhibit highlights revolutionary men—including Muhammad Ali, James Baldwin, Ta-Nehisi Coates, W.E.B. Du Bois and Kendrick Lamar—whose journeys have altered the history and culture of the country through politics, sports, science, entertainment, business and religion. Each biography is paired with original artwork by a noted artist that accentuates the subjects' individual legacies. The exhibition weaves a collective tapestry of what it is to be an African American man, past and present, and the legacy that only strengthens across generations. Participating artists include Nina Chanel Abney, Derrick Adams, Robert Pruitt, Tariku Shiferaw and Devan Shimoyama.

"As excitement builds for 'Men of Change,' we along with Ford Motor Company believe it is only appropriate to offer a variety of programs in which the perspective of the African American male can be told," says National Underground Railroad Freedom Center President and COO, Dion Brown. "We thank the Ford Motor Company for their ongoing support to enhance the experience of this exhibit for our guests."

"Each of these programs allow people to engage with Men of Change on so many levels," says National Underground Railroad Freedom Center Deputy Director, Jacqueline Dace. "By continuing to understand the value of their relationship with the community, Ford Motor Company recognizes these interactive programs will help inspire more positive stories of African American men be shared to help eliminate misconceptions of their narrative."

"We are excited to return to Cincinnati for a second time to launch a major exhibition and program", said Pamela Alexander, director of Community Development, Ford Motor Company Fund. "We are looking forward to sharing the MOC exhibit and the men of courage programs with the community.

""Men of Change: Power. Triumph. Truth." opens to the public Saturday, August 17, beginning at 10:00 a.m. at the National Underground Railroad Freedom Center. Tickets are $10 with general admission and $5 for members. For more information, visit https://freedomcenter.org/.

The National Underground Railroad Freedom Center opened in August 2004 on the banks of the Ohio River in downtown Cincinnati, Ohio. Since then, more than 1.3 million people have visited its permanent and changing exhibits and public programs, inspiring everyone to take courageous steps for freedom. Two million people have utilized educational resources online at freedomcenter.org, working to connect the lessons of the Underground Railroad to inform and inspire today's global and local fight for freedom. Partnerships include Historians Against Slavery, Polaris Project, Free the Slaves, US Department of State and International Justice Mission. In 2014, the National Underground Railroad Freedom Center launched a new online resource in the fight against modern slavery, www.endslaverynow.org. For more information on NURFC, visit https://freedomcenter.org.

As the philanthropic arm of Ford Motor Company, Ford Fund’s mission is to strengthen communities and help make people’s lives better. Working with dealers and nonprofit partners in more than 60 countries, Ford Fund provides access to opportunities and resources that help people reach their full potential. Since 1949, Ford Fund has invested more than $2 billion in programs that support education, promote safe driving, enrich community life and encourage employee volunteering. For more information, visit www.fordfund.org or join us at @FordFund on Facebook and Twitter.