On the side of the road next to an intersection in my town there's a small patch of memorials—with stuffed animals and crosses and names of people," said Zack Love. "If you want to make a left-hand turn there, you stop in the left lane at the bottom of a hill. The vehicle approaching from behind doesn't see you until they're almost hitting you. So, yes, there are accidents in that intersection."

Love, 20, would like to work on improving dangerous road conditions like this one in Talladega, Ala. He is a road safety advocate and public health major at George Washington University in D.C. He sees a natural link between both areas of interest.

"Road safety is in the public health space," he said. "And it must be included along with other issues if we are to have a safer, healthier world."

Early in 2020, Love attended the 2nd World Assembly for Road Safety in Stockholm, Sweden, as a representative of Ford Driving Skills for Life and the Family, Career and Community Leaders of America (FCCLA). He and Jane Kratz, a fellow FCCLA member, were among about 160 students from 75 countries who attended the conference.

The conference was entitled "Achieving Global Goals by 2030" and was co-sponsored by the World Health Organization. Among the speakers: Zoleka Mandela, Nelson Mandela's granddaughter, whose own daughter was killed in a road crash by a drunk driver. 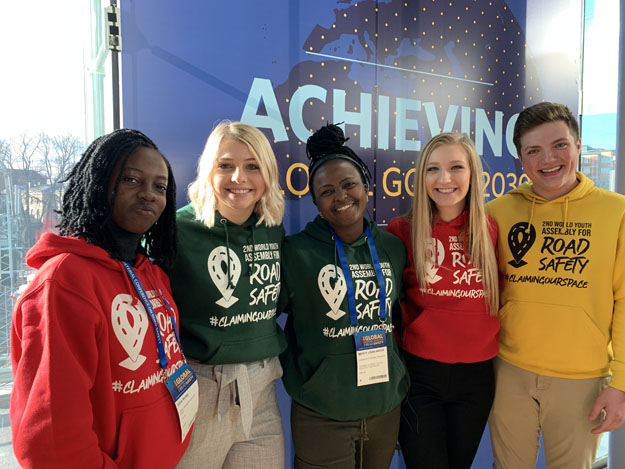 Jane Kratz and Zach Love network with other conference attendees. Photo courtesy of Family, Career and Community Leaders of America

Love came away from the conference inspired by the commitment of youth around the world to educate their communities about road safety and implement ideas to prevent fatalities in their countries. This month, he and Kratz will present virtually their learnings from Stockholm to the annual FCCLA conference.

"I went to the ministerial conference thinking as young people, we would not be taken seriously, especially when it comes to driving," he said. "All too often, youth are painted as dangerous on the roadways and passive in terms of safe decision making. But in Stockholm, I saw a huge body of youth saying these fatalities are not all our fault and we want to work to help solve the problems.

"I saw young people advocating for safer roads in their countries—from environmentally friendly transportation to safer and user-centric built environments, young people were at the forefront of the conversation." Love said. "Road safety is such a multi-dimensional area of study. From the moment the car starts a journey to the end, so many players have touched that experience: manufacturing, policy makers, urban planners, traffic maintenance and your own personal driving behavior."

As a youth leadership organization, FCCLA has a strong interest in safe driving for youth. Through its FACTS program (Families Acting for Community Traffic Safety), FCCLA encourages young leaders to learn and promote safe driving habits. FCCLA and Ford Driving Skills for Life have partnered for seven years to bring this training to the forefront.

Kyle Green, Ford Driving Skills for Life International manager, was on the selection committee to identify the two students to receive scholarships to attend the Stockholm conference.

"Zack shows a strong passion for advocacy and leading through service," Green said. "This was evident during the interview process and even more so upon his return from the World Youth Assembly. He will take the knowledge he has gained from this experience and apply it to his future career plans."

Road fatalities among teens have declined over the past 15 years due, in part, to successful awareness campaigns to increase seat-belt use and decrease distracted and drunk driving.

"The trend is good," Green said. "But if you're a parent who has a lost a child, you don't care about the trend. We want to prevent all parents from having to go through that.".

Family, Career and Community Leaders of America (FCCLA) is a dynamic and effective national student organization that helps young men and women become leaders and address important personal, family, work, and societal issues through Family and Consumer Sciences education. FCCLA has over 182,000 members and more than 5,253 chapters from 48 state associations, Puerto Rico, and the Virgin Islands.