Earlier in my career, I was a critical care nurse at a hospital in Detroit caring for a 50-year-old man with heart disease. In the middle of the night, the monitors started beeping and the monitors showed the line flattening. I hollered, 'Code blue! Code blue!'

"The surgeon ran in and said, 'We have to split the chest.' Before I knew it, I was looking down at this man's heart. The surgeon grabbed my hand and put it on the heart. I began to gently clap the heart; it started to quiver. And then it started to beat.

"It was a pivotal moment in my life. I have not been the same person since. This is what some call a spiritual synapsis. We all have them. We just aren't aware of them and often don't know how to capture the moment."

Najah Bazzy not only captured the moment; she has been guided by it. Eventually her role as a nurse expanded, and she has found her life's work. 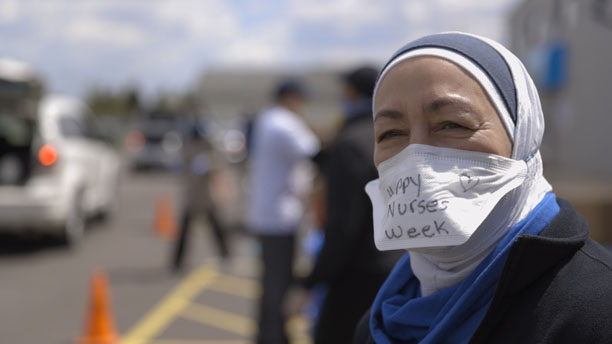 Today, Bazzy, 60, is a world-renown humanitarian recognized for her work as founder of Zaman International, a Detroit-based nonprofit organization dedicated to eliminating poverty and restoring dignity among refugee women and children. She has earned a 2019 CNN Top Ten Hero award, among many other such honors.

Zaman's humble beginnings reflect Bazzy's approach to life: Fix the immediate problem. Do not be slowed down by limitations. Follow the guiding spirit. In the beginning there was no office, no staff, no organization. There was only Bazzy. Her van. And her outstretched hand.

For nearly 15 years, Bazzy delivered food, clothing and household items to newly arrived families in Detroit and Dearborn who had next to nothing. She asked her doctor and nurse colleagues for contributions. And when her van grew too small to store all the donated items, she asked her friends to make room in their garages. 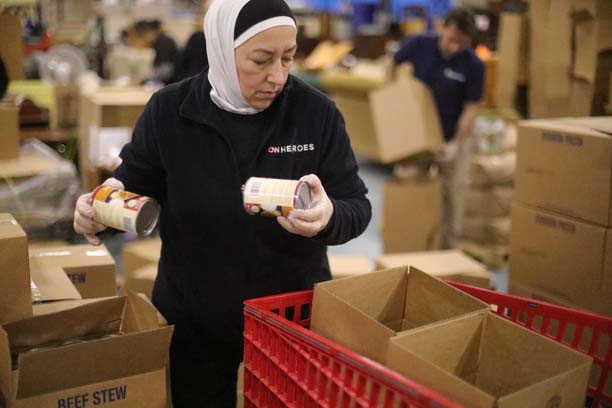 Bazzy remains every bit the visionary today as she was then. In January, when coronavirus was an exotic name of a far-off medical condition, Bazzy was planning for the devastation it could cause at home.

"I lived through the HIV crisis. I spent time in critical care, the emergency room, with end-of-life patients. It was almost instinctive, anticipating what we are seeing now: food insecurity with hundreds of cars lined up to receive food. A lot of phone calls, a lot of fear around not being able to pay bills.

"Prior to the state's shelter-in-place order, I knew we had to prepare. I mobilized our team and we talked about what was coming: The first crisis is going to be around the availability of food. The second is economic anxiety. And the third is grief.

Focus, efficiency and strategy are the reasons why Zaman was able to continue its services without interruption—as well as add new ones—when the pandemic did hit Detroit.

Zaman's food pantry, which had been open to the community, has become a food distribution center where volunteers pack food kits and provide them to area families. Vocational arts and literacy classes for women who are the head-of-households have continued—online. Social work and case management have also continued and can help calm the anxiety of those who miss rent payments and utility bills.

And, perhaps most important, her team is ready to offer grief support for those who have lost loved ones.

Though much of Zaman's current focus is on meeting the needs of COVID-related emergencies, the programs that put Zaman on the map continue. Plots for Tots Infant Burial Program assists families in poverty who suffer miscarriages and infant deaths. Those families include refugees who often experience language barriers and do not understand how to have their infants' remains released to them from hospitals. Zaman helps these families through this heart-wrenching process ensuring their religious and cultural beliefs are honored and they are treated with dignity. Zaman gives these babies proper burials.

Another program, less grave, but impactful just the same, is the Back to School Initiative. The program expanded in 2015 with a $12,500 grant from Ford Fund, and provides backpacks filled with new school supplies to K-12 students at the beginning of each school year. More than 5,000 students have been served.

This grant represents an on-going relationship between Ford Fund and Zaman. In 2016, Ford Fund donated a Ford Transit to support Zaman's food pantry operations. And in 2018, Zaman became a nonprofit partner in the Ford Volunteer Corps—a global network of Ford employees and retirees who lend their time and expertise in tens of thousands of community service projects each year.

Bazzy said the backpack program will continue this fall whether students return to brick and mortar schools or continue to their classes from home.

"It's important that kids feel they are counted," she said. "The ritual of collecting school supplies at the beginning of the school year is exciting for kids. It's symbolic of hope for the future, and Ford Fund helped make it possible."

"These times require a collective human response. If we could look through the lens of our collective heart, maybe we would be kinder and there would be less war and less destruction. I believe we will learn to honor the differences between us. That's the human spirit. It is something beautiful to watch.

Zaman International is a Detroit-based nonprofit organization dedicated to eliminating poverty and restoring dignity among refugee women and children. Since 2015, Ford Fund has supported various Zaman initiatives that address hunger relief and provide educational and other resources that help strengthen communities.