When Matt Prentice began cooking at age 12, he never envisioned becoming Detroit's biggest restaurateur. Neither did he consider overseeing culinarians in a soup kitchen or buying produce from a farm grown in a 320-square-foot shipping container. 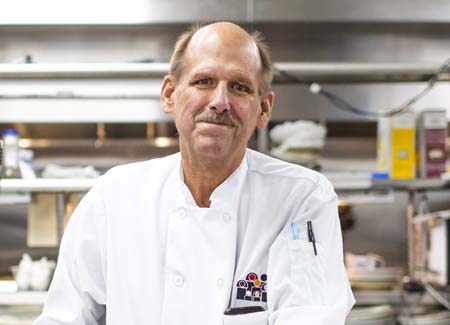 Prentice is known for his culinary prowess and for opening and operating successful restaurants, including Morels, Northern Lakes Seafood and No. VI Chophouse.

After leaving the restaurant industry for six years, Chef Prentice is back in business with Three Cats, an American small plates restaurant in Clawson, Michigan, with a heavy influence on local products. He also is the first restauranteur to purchase food harvested from the freight farm Cass Community Social Services (CCSS) began operating last fall.

"Our opening menu was 75% Michigan sourced and Cass is a natural," Prentice said. "The product is pristine."

CCSS provides housing, workforce training, health services and food. Like all of the nonprofit's successes, its visionary new freight farm is the result of collaborative alliances with individual, nonprofit and corporate partners, including those with Prentice and the Ford Motor Company Fund.

The freight farm, located inside a Cass Community facility, a former 320-square-foot shipping container that was retrofitted with a hydroponic system. The system uses 90% less water than traditional farms. There's no need for herbicides or pesticides there because the plants grow entirely indoors.

"You don't have to be there every day," Rev. Fowler said. "On this farm, you can work from your smartphone from Florida, from anywhere. On a regular farm, you worry about being washed out by rain. You worry about frost. This farm is predictable. It's going to give you a good crop every time."

Freight farm Supervisor Kathy Peterson works with Master Gardener Charlotte Gale and a team of volunteers to keep the plants thriving. Every two or three weeks, the farmers germinate, plant, grow and harvest yields that would require 1.8 acres of farmland.

"It fits with our plan for sustainability. There's very little wasted because it's all smartly used," Fowler said. "It's a great way to grow food." 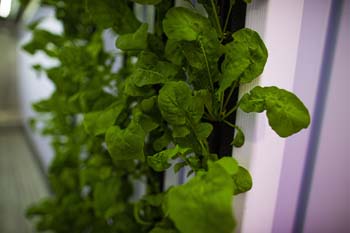 Arugula seeds are placed individually in soil then moved into vertically hanging containers to receive nutrition via saturation strips in the Freight Farm. Photo by Charlotte Smith

The farm contains 256 columns of vertical planters with a minimum of eight plants growing from each; so, at least 2,048 plants grow at once. LEDs provide the necessary light and dripping pipes provide water. None of the water is lost to runoff because it all goes directly to the plant roots. Some of the plants get extra nutrients pumped in through the water.

Three years ago, CCSS began cooking meals for its soup kitchen from scratch. There was a problem: The organization couldn't serve many fresh vegetables with its meals.

"Everybody has been talking about urban farming for more than a decade," Rev. Fowler said. "It's good because you can serve healthy, fresh food. The things that are good for people. The problem is harvest time for traditional farms in Michigan is June through September. That means during the rest of the year, you're not having this. People who go to Kroger won't see that as a big deal. But as a soup kitchen, we rely on donations so we don't have fresh foods for long stretches of time."

The freight farm hasn't helped Cass feed more people yet. However, it is helping them feed people better.

"The ability to offer fresh food and a good variety is exciting…and a huge advantage," Fowler added.

CCSS's freight farm started with a challenge of sorts.

In 2017, Executive Chairman Bill Ford launched Ford Thirty Under 30 to create a new generation of community-minded leaders. Ford charged its fellows to come up with ways to fight food insecurity.

The inability for people to acquire enough food to sustain themselves and their families is no small issue. In 2018, more than 37 million people suffered from food insecurity. Subsequently, 13 million children relied on food banks for nourishment, according to statistics from the U.S. Department of Agriculture. In Southeast Michigan alone, nearly 700,000 people live in poverty and 900,000 adults and children are food insecure.

"If you're poor or homeless, you most likely have lousy health," Rev. Fowler said. "People struggle with diabetes, hypertension and heart disease. So, much of our health is reliant on a good diet. There are some new grocery stores, but not every neighborhood has a decent grocery store. Many people continue to shop at gas stations and liquor stores. And if you don't have transportation, taking buses to a grocery is not convenient."

While Thirty Under 30 partnered most of the participants with external nonprofits, Chris Craft, David Root and Michael Riffenburg were tasked with helping the Ford Fund update its mobile pantry program. Research led them to focus on improving nutrition. So, the team got to work. 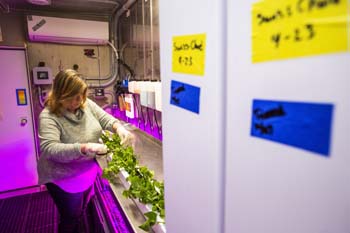 "Clients (of food banks and soup kitchens) were not really wanting healthy food, didn't know what to do with it or how to prepare it because of systemic poverty," said Craft, a Ford interior lighting engineer and 2017 member of the Thirty Under 30.

First, they decided to turn an F-150 pick-up truck into a farm they could use to educate youth. Then they discovered a freight farm in Grand Rapids created from an old 40-foot shipping container.

"It was cool," Craft said. "We tried the lettuce, and it was the best lettuce I ever tried."

The team, which presented their idea for the truck and freight farms to Bill Ford and Ford President and CEO Jim Hackett, won the $250,000 Bill Ford Better World Challenge (BFBWC) grant.

They dedicated half of the BFBWC funds to education and growing food from the bed of the pickup, which allows CCSS to visit area schools to talk to thousands of students about farming, growing and nutrition.

"My goal is to get kids excited about where food comes from. We took an F-150 to a Redford school. It was amazing to see their eyes light up when they saw plants growing in it," Craft said.

"I really hope it teaches kids where their food comes from. And I want them to learn there are healthy options, and that feeding your body with nutritious foods is important and affects the way you feel."

When CCSS took the mobile farm to one school, a little girl asked why there was dirt in the truck?

"Plants grow in dirt," Rev. Fowler explained to the child who had never seen vegetables grow.

The other half of the BFBWC funds went toward purchasing the freight farm, retrofitting it, hiring a manager and training staff and volunteers.

The arugula and other plants are harvested in a sanitized area following food safety practices in the Freight Farm .Photo by Charlotte Smith

Rev. Fowler said both projects fit into CCSS values. "Cass has a history of working on environmental things," Rev. Fowler said. "That we can do it with Ford, which has been a tremendous partner of ours, is a great thing. Ford Fund has helped with many programs through the years, including tiny homes. And the farm can help us produce more food year round and expand our jobs program. We were very excited about it."

She said some of the food from the freight farm goes to the CCSS pantry, if someone requests greens. However, most of the farm's yield goes to the soup kitchen, which serves about 700,000 meals yearly.

The clients love the food, Rev. Fowler said. "They eat it and have their kids eat it," she said. "It tastes good."

"A favorite amongst the people served in the kitchen is a tomato basil salad," said Prentice, who also was Cass's food services director.

There also is a demand for basil, Prentice said. His restaurant has already placed a standing order for the mobile farm-grown herb.

"They are also growing arugula, mesclun (baby greens) and bib lettuce right now," Prentice said. "Arugula is going to go into a salad we'll serve at the restaurant. It's going to be cut and I will be using it that day. You just can't get better food."

When the public reads about recalled produce, it's often because of foodborne pathogens that a harvester may have introduced to the yield at a traditional farm, he added. But, he doesn't worry about that with CCSS's produce.

"In this particular farm, they are careful about that," Prentice said. "They even remove their shoes before entering the farm. It's a very sterile environment. So, I don't have any food safety concerns."

The College of Agriculture & Natural Resources at Michigan State University and other nonprofit organizations have come to look at the CCSS freight farm with the possibility of replicating the project, Rev. Fowler said.

While she doesn't know if CCSS will develop additional freight farms, she is open to the idea if circumstances are right.

"We would need enough restaurants to help cover the salaries and utility costs," Rev. Fowler said.

Prentice believes Cass could use the farm as a seed incubator for a hoop house, which resembles a greenhouse created over an outdoor garden. This would allow CCSS to grow more food.

In any case, Fowler and Prentice recognize the freight farm is a work in progress. Prentice said they are starting to formulate a business model. He also sends purchasing sheets from his restaurants' vendors to freight farm supervisor Peterson to help her know the marketplace and make good decisions.

"Ford Fund gifted CCSS the farm, which is terrific, but it's our responsibility to make financial sense out of it," Prentice said. 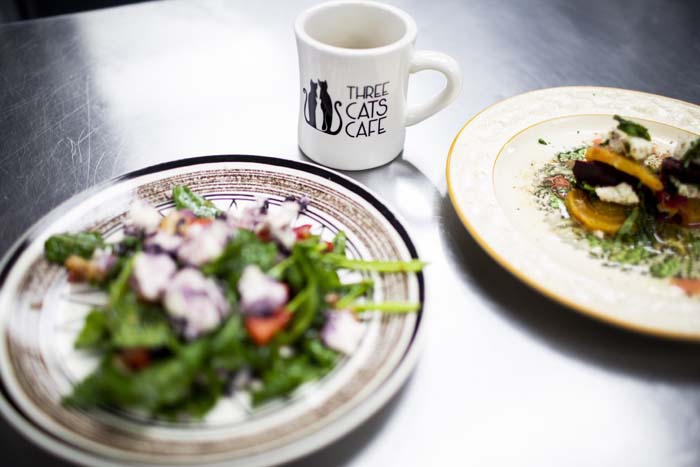