"Andrew Young is a living legend in the continuing struggle for equal rights," said Pamela Alexander, director, Ford Motor Company Fund. "A Ford Freedom Award Scholar and Men of Courage champion, Ambassador Young continues to inspire generations of all ages and all walks of life with his commitment and experience in the cause of freedom."

The Men of Courage: Andrew Young Film Series will premiere a new hour-long film throughout the year on the third Thursday of each month beginning with "Son of New Orleans" and followed by installments, including: 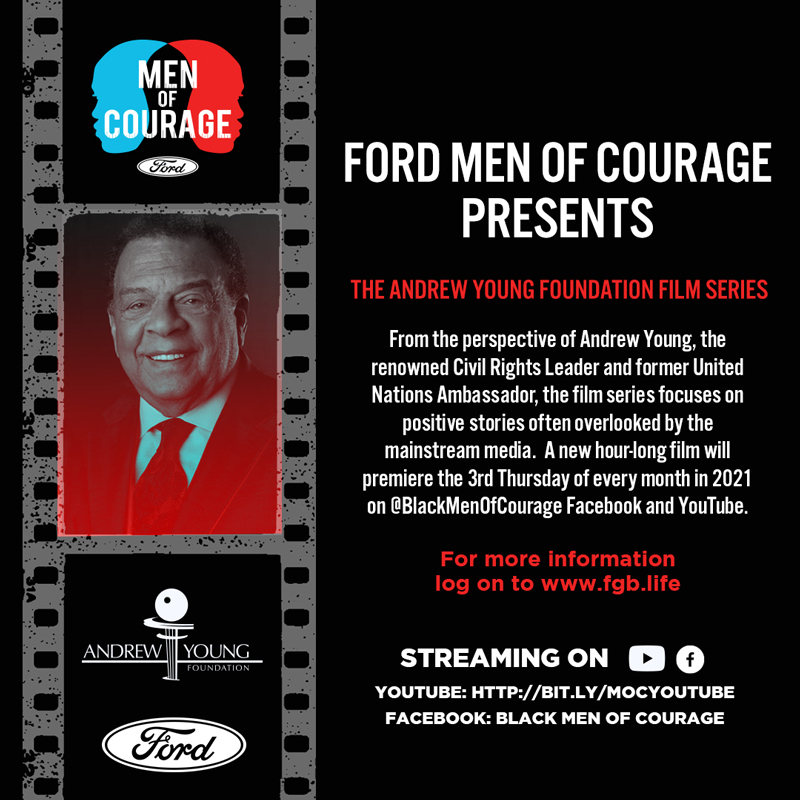 • "The Whirlwinds of Revolt" – Young recounts his earliest meeting with Dr. Martin Luther King Jr. and how they might never have become friends and colleagues had it not been for their wives.

• "Think Young" – A look back and forward with rare footage that dramatically illustrates the story of Congressman John Lewis, the civil rights hero and friend of Young.

• "Leaving Selma" – The murder of a local demonstrator leads to the most epic event of the civil rights movement—"Bloody Sunday"—at the Edmund Pettus bridge.

New films will premiere on the third Thursday of each month on the Men of Courage YouTube and Facebook pages.

With a mission to advance the narrative of African American men, since 2015 Ford Fund’s Men of Courage has recognized Black men across the United States for their many achievements and contributions to our communities and our world.

Most recently, the program hosted Barbershop Challenges in Cincinnati and Tacoma, Wash. A keystone of the African American community, participating barbershops host three months of community programming through the challenge. At the conclusion, the winning barbershop is awarded grant funding to help continue its community program and the runner up is awarded funds for a local nonprofit of their choice.