While the official open date is in October, Ford's community center in Bangkok is already playing host to programs for the community and local nonprofits 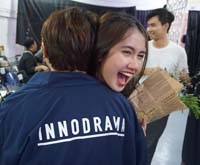 BANGKOK, Thailand — Ford Fund will officially open its fifth Ford Resource and Engagement Center — FREC Bangkok — in October this year, but the space is already up and running and reflecting the story of its community.

Students from the drama club at Thammasat, one of Thailand's top universities, took a somewhat meta approach to storytelling: they hosted two sold-out performances of a "play about a play" about the historic Nang Loeng neighborhood — and performed it in Nang Loeng — at the FREC Bangkok auditorium that was transformed into a makeshift theater. The audience was engaged throughout the performance, laughing and enjoying a show that featured the community's unique history and even featured a surprise telenovela-style finishing twist in its very final scenes.