Led by Metro Phoenix Ford Dealers, the annual "Fill an F-150" bottled water drive will help those in need stay hydrated during the hot summer months

PHOENIX — Seven years ago, Ford Motor Company Fund and Metro Phoenix-area Ford dealerships launched the "Fill an F-150" bottled water drive with the goal of helping The Salvation Army keep those in need hydrated throughout the hot summer months. Since its launch, more than 700,000 bottles – or 350 tons – of water have been collected.

This year, in partnership with Phoenix-area Famous Dave's restaurants and Six Flags Hurricane Harbor Phoenix, more than 117,000 bottles were collected. The water will be donated to The Salvation Army's Emergency Disaster Services, which provides hydration, respite and safety information to those in need at heat relief stations in Metro Phoenix on days with excessive heat warnings. According to Maricopa County public health officials, there were a record 181 heat-associated deaths in Maricopa County in 2018 alone.

All 13 Metro Phoenix-area Ford dealerships and four Valley Famous Dave's restaurants collected cases of water during a two-week drive in May. Hurricane Harbor provided a half-off any-day general admission coupon to each person who donated at least one case of water, and Famous Dave's provided a voucher for one free brisket sandwich. 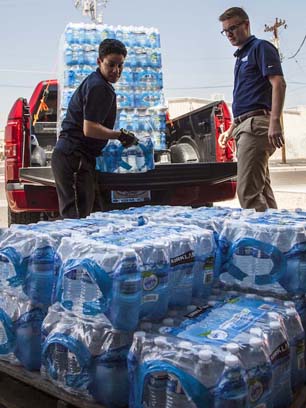 "In the Valley, heat is our natural disaster, and the human toll can be just as devastating as in parts of the country that experience hurricanes, tornadoes and floods," says Maj. David Yardley, The Salvation Army Metro Phoenix program coordinator. "Many people need our help to survive the heat, so we are grateful for this partnership with Ford, Hurricane Harbor and Famous Dave's, which provides vital hydration to those in need."

Glendale, Arizona-based Sanderson Ford is responsible for approximately half of the total water collected to date. The dealership, which donated 56,192 bottles of water this year, offers robust support for the water drive each year because they firmly believe that "it's the right thing to do!"

"Summertime in Phoenix can be brutally hot and we need to help as many people as we can," says Mark Witthar, general manager of Sanderson Ford. "This program puts water in the hands of the people that can help the most – The Salvation Army."