Our Voices: Our Stories — The Tuskegee Airmen

DEARBORN, Mich. — In commemoration of Juneteenth, The Ford Fund is sharing a documentary, Our Voices: Our Stories—The Tuskegee Airmen, that tells the compelling stories of two African Americans—Lt. Col. Harry Stewart Jr. and Lt. Col. Alexander Jefferson—who served in the U.S. military as pilots in the Tuskegee Airmen during World War II.

"People have seen many movies about the Tuskegee Airmen, but they're all presented from someone else's perspective," said Pamela Alexander, director of community development, Ford Fund. "Heroes are often humble and frequently shy away from telling their own story, so it is up to all of us who value their contributions to make sure they are heard."

The Tuskegee Airmen were the first Black military aviators in the U.S. Army Air Corps (AAC), a precursor to the U.S. Air Force. Trained at the Tuskegee Army Air Field in Alabama, they flew more than 15,000 individual sorties in Europe and North Africa during World War II. They were responsible for safely escorting and protecting bombers in combat so that they could successfully complete and return safely. Their impressive performance earned them more than 150 Distinguished Flying Crosses and helped encourage the eventual integration of the U.S. armed forces.

In the 50-minute documentary, Stewart and Jefferson share first-person accounts of what life was like for African Americans who served in the military during World War II, their experiences as combat pilots in the 332nd Fighter Group and some of the struggles they faced when they returned home after service.

During a Ford Curious Minds session, Soaring to Glory: A Tuskegee Airman's Firsthand Account, Stewart described what he would like the legacy of the Tuskegee Airmen to be.

"It's the dedication that the Tuskegee Airmen had at the time under adverse circumstances. They all had a dream and that dream for most of them was to fly, to become pilots," he said. "I think if you have a dream the lesson is to follow that dream and try to keep anything from deterring that dream. Work on it hard and look to achieve excellence in whatever you do."

When the Tuskegee Airmen received the Congressional Gold Medal in 2007, President George W. Bush saluted the officers in a symbolic gesture which he said was "to help atone for all the unreturned salutes and unforgivable indignities" they endured. Stewart reflected on that historical moment and offered advice for others who feel their voice is not being heard. 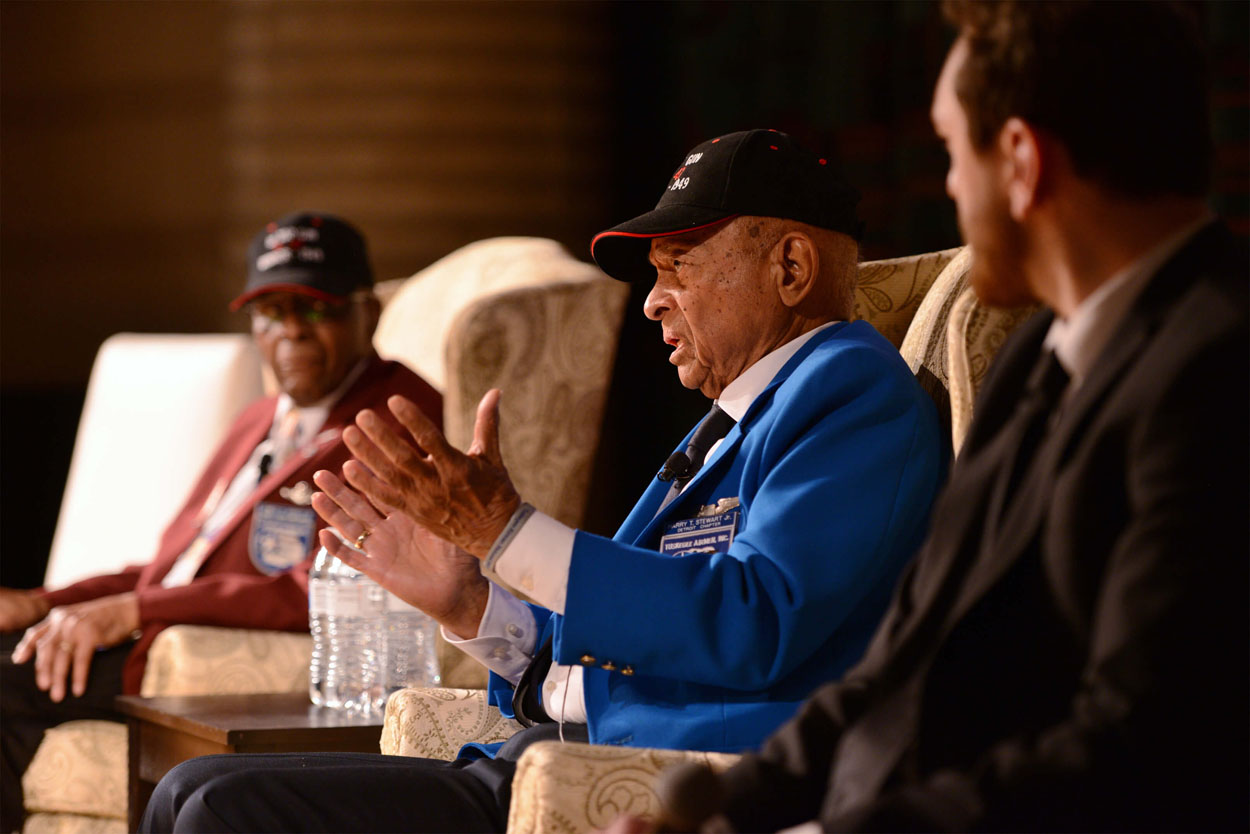 "The biggest thing is to … keep your eye on the prize and don't let any type of discouragement defeat you," he said. "We have that situation occurring today where people's voices are being shown because of injustices that are taking place. We had similar injustices back in my day I think we were able to overcome it by … heading a steady course and our belief in the Constitution of the United States. We had faith that they would be overcome."

Stewart flew 43 missions during WWII and amassed an outstanding record. He is widely acclaimed for being one of only four Tuskegee Airmen with three aerial victories in one day, and he was awarded the Distinguished Flying Cross for taking down three German Focke-Wulf 190s. Jefferson participated in many successful missions, protecting bombers and strafing enemy targets on the ground.

The Tuskegee Airmen documentary was featured at the 2020 Freep Film Festival, which was held virtually at the end of April and Ford Fund held a special virtual screening of the film last month at the Museum of Tolerance in Los Angeles.

"It was amazing," said Alexander. "The documentary closed the Freep Film Festival and was very well received in Los Angeles with people tuning in to watch it from Europe."

Ford Fund is a major sponsor of the Tuskegee Airmen and the Tuskegee Airmen National Historical Museum, which will soon make its permanent home inside the Charles H. Wright Museum of African American History in Detroit. The documentary will be used to help visitors learn about the heroic efforts of America's first black military pilots.

Ford's longstanding support of the African American community dates back to the early 1900s when it was the first automaker to pay employees of all races the same wage.

Today, Ford Fund continues to build on that legacy with numerous initiatives that celebrate and empower African Americans. Two signature programs include Ford First Gen, a program that provides first-generation college students support to help them graduate from school; and Ford Men of Courage, a national grassroots initiative aimed at changing the narrative around African American men through storytelling and community programs.